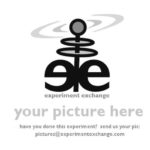 In this science experiment, kids will explore acid-base reactions and densities of liquids while making a cool underwater volcano!

We added the oil layer so that the glob of baking soda would be partially protected by the oil from reacting with the vinegar.  This results in the baking soda glob sinking, getting covered with bubbles, rising to the surface where the bubbles pop, then sinking again, over and over until it is completed dissolved into the vinegar.  This is what creates all the motion in your underwater volcano.

Oil and vinegar do not mix because they have different densities. Density is the amount of mass something has in a certain volume. For example, vinegar (like water) has large, closely packed molecules, so it has a lot of mass. Oil, on the other hand, has smaller, more well-spaced molecules, and thus has less mass. This makes the oil float on top of the vinegar.

Underwater volcanos are places on the ocean floor where molten lava is bubbling up from below the earth's surface.  As the lava bubbles up, it cools and forms solid mounds.  These mounds sometimes get so large that entire islands are formed.  For example, this is how the Hawaiian Islands were formed.

Fill the glass container about 1/2 full of vinegar.

Pour a thick layer of oil on top. Notice that the oil does not combine with the vinegar.

Mix water with baking soda a bit at a time in a separate cup until you have a thick, goopy paste.

Drop about a teaspoonful of the baking soda paste into the glass container.

Watch as the "lava" bubbles up!