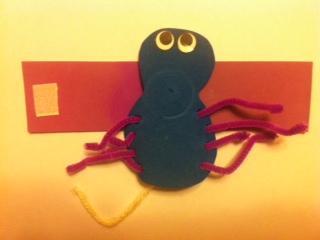 Simple Science:  Insects have 6 legs and 3 body parts, but spiders have 8 legs and 2 body parts.  A spider is not an insect; it's an arachnid. Other arachnids include scorpions and ticks.

Ever wonder what a web is made of?  All spiders weave webs out of silk, which is like a thin piece of really strong string.  The silk comes out of a hole at the bottom of the spider’s body, where it has “spinnerets.”  A spider can weave a web in about an hour.

Ever wonder why spiders weave webs?  Most spiders weave webs to catch food.  Parts of their webs are sticky and insects sometimes get caught in them.  Once an insect is caught, the spider can wrap it up in silk so it can’t get away.  The spider will eventually eat the insect.

Ever wonder if all spiders spin webs?  Not all spiders spin webs.  Some spiders, like the wolf spider, tarantula, and trap-door spider typically catch their food in other ways.  These spiders often live in burrows, which are holes in the ground.  They might grab insects or other food as it comes by their burrow.  The trap door spider uses its silk to build a wall with a trap door on top that insects can fall in. 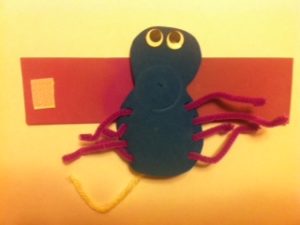 Use a hole punch to make 4 holes on either side of the body.  Attach eyes to the head and attach the head to the bracelet.  (This is important, because the kids will need room to thread "legs" through the body.)  Hot glue works best.  Be careful if using staples, as this can scratch.

Invite the children to weave 4 pipe cleaners through the holes of the body to make the 8 legs. (You may need to tape these in place.) They can decorate the foam body with markers to make a special spider, then tape a piece of yellow yarn to the rear end to make spider silk.  They can attach it to their wrist to wear home.

Play the song Everyone is a Star by Ryan Buckle