Notice: Trying to get property of non-object in /home/usk0bunr7b3n/public_html/expexchangeprod/wp-content/plugins/foodiepress/public/class-foodiepress.php on line 1237 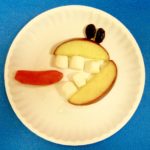 Fossils are evidence of animals or plants that lived a long time ago.  Examples include bones, teeth, shells and leaf imprints.  Paleontologists study fossils for clues about what life used to be like on Earth.  They measure the fossils and take pictures of them, and are very careful with their tools so they don’t break or damage what they've found.  Many museums have wonderful examples of fossils that you can go see, and maybe even touch.

Most dinosaurs were plant-eaters (“herbivores”), but some were meat-eaters (“carnivores”).  Dinosaurs that ate both plants and meat are called "omnivores."  Paleontologists can tell a lot about what dinosaurs ate by fossils of their teeth. Herbivores usually had blunt, flat teeth that were good for stripping leaves and twigs from trees and chewing up tough plants, whereas meat-eaters had very sharp teeth.   Examples of herbivores are Stegosauruses and Triceratopses.  Examples of carnivores include Tyrannosaurus Rexes (T-Rex) and Velociraptors.

Slice apples and toss in lemon juice to keep them from browning.

Spoon honey onto the plate and spread it around using a spoon.

Place two apple slices together so they touch at one end to look like a jaw.

Raisins can be added to make eyes and mini marshmallows to make the blunt teeth that an herbivore would have.

Add a baby carrot for the herbivore to eat!

Extension:  make a carnivore by replacing the marshmallows with triangle crackers.  Be sure to also replace the carrot with a chunk of meat!