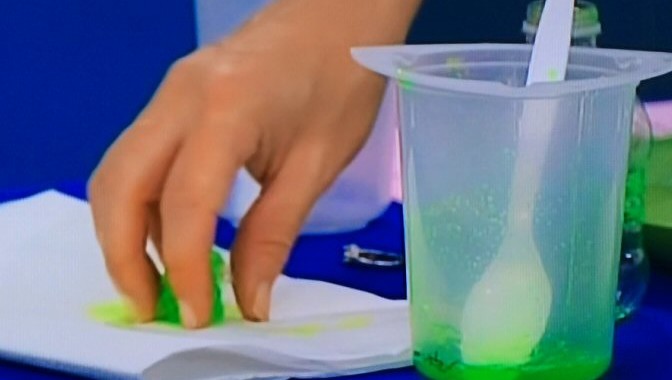 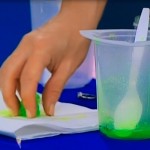 The school glue we used in our solution contains a polymer called polyvinyl acetate. When we add Borax to the glue, the polymer chains in the glue are linked together creating something that looks like a net or spider web. This is called a “cross-linked polymer” which is stretchy – like slime!

Your creation glows under a black light because it contains phosphors extracted from the highlighter ink. Phosphors are chemicals that absorb then release energy from light. The glow can last from a few milliseconds to up to a few hours. When the phosphors release the light quickly, this is called “fluorescence.” When phosphors release the light slowly and create a lingering glow, this is called “phosphorescence.”

Using a black light is a great way to demonstrate phosphors. A black light emits ultraviolet radiation type A, or “UVA” radiation. This is similar to the ultraviolet radiation type B (“UVB”) that comes from the sun, but is not harmful. (When you look at a black light, you will see a purplish glow, but this isn’t the UVA radiation. The UVA radiation is there, but it is invisible.) When UVA radiation shines on things containing phosphors, the phosphors absorb the invisible light and turn it into visible light. A fluorescent toy will only glow while the black light is actually shining on it; it won’t save up the light and release it over time like a phosphorescent toy. This is the case with our glowing slime: it is fluorescent and will only glow while under a black light.

When a ball bounces, it is essentially squishing (when it hits the ground), then un-squishing (as it pushes back up). Several variables may make a ball less or more bouncy. One variable is the composition of the ball itself. Some matter, like rubber for example, has more spring to it than other matter (like chewed up gum).

Bounciness can also be impacted by how a ball is built. For example, a soft basketball doesn’t bounce as well as one full of air – even though both are made of rubber and air. That’s because when a soft basketball hits the ground, the energy gets spread around more than when a hard, fully inflated basketball hits – so there’s less upward motion. Bounciness can also be impacted by the ground. Hard, heavy balls don’t bounce as well on soft ground because their energy gets absorbed. But a steel ball will bounce well on a steel floor!  Temperature can also impact bounciness by making the material in the ball softer (heat) or harder (cold), or increasing/decreasing the air pressure inside the ball (because hot air takes up more space than cold air).

Borax and school glue can be harmful if ingested.

To make fluorescent water, see the “Make Glowing Water” activity on this site.

Stir the fluorescent water and Borax in a cup until the Borax is dissolved.

Drop your glue into the water and Borax solution by the tablespoon, stirring the glue as it is pouring in. As the glue hits the solution, it will solidify into a slimy substance.

Fish out the glob of glue with your hands and wrap it around a small plastic spider. If it is still sticky, dip it into the Borax solution over and over until it’s all solid. The more you handle the slime, the more firm it will become. Eventually, you will be able to form it into a ball that bounces.

If your ball gets too firm or loses its shape over time, try microwaving it on high for about 10 seconds; this will soften it enough to form it back into a ball.