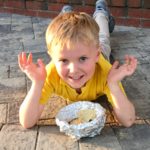 In this simple STEM activity, kids make and experiment with an oven powered by solar energy.

Simple Explanation:  This device collects and absorbs enough heat energy from the sun to "cook" food!  "Solar" refers to the sun, and is an example of renewable energy.

Design & Engineering:  To make a solar-powered oven, you need 3 basic things:  a container (possibly with a top that allows light in but traps the warm air, such as plastic wrap), a reflective element to concentrate the sunlight, and an dark-colored element to absorb the sun's heat energy.  In the example in this activity, the design works well because the curve of the bowl and the aluminum foil reflect the sunlight down into the bottom of the bowl.  Then once the sunlight hits the bottom of the bowl, the black paper absorbs the heat from the sunlight. Finally, if you add plastic wrap, it will insulate the oven, helping to keep the heat inside.  (It will also keep critters out!)

About the Sun:  The Sun is a star – a huge spinning ball of gas that emits light energy.  You may not think of it that way because you see the Sun during the day and other stars at night.  But there are always stars in the sky – it’s just that the light of other stars gets washed out by the brilliance of the “starlight” from our Sun.

The Sun has many different parts.  The core of the Sun produces enormous light and heat – up to 24 million degrees F!  The photosphere is what our eyes see as the Sun.  The chromosphere is the layer of the Sun’s atmosphere just above the photosphere; this is the part that gives off most of the ultraviolet rays.  The corona is the Sun’s extended outer atmosphere.  This is the white halo visible during a total solar eclipse.  The corona is much hotter than the surface of the Sun, and produces a type of light called X-rays.

The Sun emits many different kinds of light rays.  Not all of them are visible to the human eye, and some can be very dangerous.  Ultraviolet ("UV") light is an example of dangerous invisible light rays given off by the Sun.  UV light can burn our skin and eyes if exposed for too long.  That’s why it’s important to wear sunscreen, hats and sunglasses all year round, and never, ever to look directly at the Sun.  If you can see sunlight, its UV rays are reaching you, regardless of how cold it is outside.

While there are countless stars in the universe, the Sun is the closest star to planet Earth, which makes it very important to us. The Sun is at the center of what we call our “solar system”; all of the planets in our solar system orbit around it.  It is made up mostly of hydrogen gas, and is 93,026,724 miles from the Earth. A ray of light from the Sun takes 8½ minutes to reach Earth – traveling at 186,000 miles/sec.  The Sun makes life on Earth possible because it gives us light and heat.

Cover the inside of the bowl in aluminum foil, keeping it as smooth possible.

Trace around the bottom of the bowl onto a piece of black construction paper, then cut out the circle.  You may want to tape it in place.

Place the snack you'd like to "cook" in the bottom of your oven.  A piece of chocolate and a mini marshmallow on top of a piece of graham cracker works well, as does a bit of shredded cheese on top of a cracker or corn chips.

Optional:  cover your bowl with a piece of plastic wrap and secure with tape as necessary.  This will help keep the heat in and the critters out!

Place in a very sunny area near a window or outside.  Depending on how bright the sun is and the temperature around your oven, your snack should be "cooked" in 15 minutes or less!

Extension:  Try engineering different solar oven models using the various required elements.  What happens when you use a bigger container?  A smaller one?  When you add insulation (like a dishcloth) to the bottom or sides?  Does the oven get hotter when the inside is painted all black vs. covered with foil?