Make a Mummy (and compare to something that is allowed to rot!) 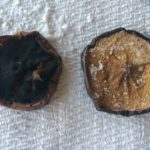 Make a Mummy (and compare to something that is allowed to rot!)

In this science experiment, kids make their own "mummy" using an apple slice, baking soda and salt -- and compare it to a gross apple slice that is allowed to rot.

Traditionally, a mummy is the body of a person or animal that has been preserved.  In museums, you can see mummies that were made thousands of years ago by the ancient Egyptians for religious reasons.  They used natural ingredients such as resin and pitch from conifers, resin from pistachio trees, beeswax, a salt called "natron," juniper oil, camphor oil and myrrh to preserve bodies that they believed would be used again in the afterlife.  (In fact, the word “mummy” derives from the ancient word for wax, “mum.”)  These ingredients prevented the body from decomposing from bacteria, enzymes, mold and other microorganisms.

Mummification can also happen naturally if a body dries out quickly before bacteria can destroy the body -- for example, in a dry, desert area, or in a cold, snowy area that never warms.

In this experiment, the baking soda and salt act as preservatives that prevent microorganisms like bacteria and mold from breaking down the protected apple slice. The unprotected apple slice eventually becomes slimy and moldy, showing what decomposition looks like.

While mummies of people and animals are no longer common, we still use natural and man-made preservatives extensively in foods to keep them from spoiling.  Natural preservatives include salt (e.g., in beef jerky), sugar (e.g, in jelly) and vinegar (e.g., in pickles); chemical preservatives include benzoates, nitrites, sulphites and sorbates.  Look at any box or can of food in your pantry -- you are likely to see one of these ingredients on the food label.

Only adults should cut the apple slices.

Children should not touch the moldy apple slice at the end of the experiment, or eat either slice.

Cut two apple slices from the same apple, about 1/4" thick.

Combine equal parts baking soda and salt in a cup; be sure you have enough to completely submerge one of the apple slices.

Place one slice in cup plain; bury the other in the cup with the baking soda and salt mixture.  Place both cups in a cool, dark place for about a week.

When you pull the apples out, they will look very different. Don't touch the one that has not been preserved, as it will be covered with bacteria and mold, but be sure to check it out in comparison to the preserved apple.

Extension:  use large petri dishes instead of cups to make a "sarcophagus"  for your mummy.  This also makes it easier to compare the apple slices side by side without worrying about the children touching the moldy apple.