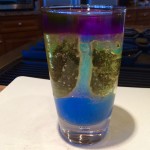 In this science experiment, kids will experiment with acid-base reactions and liquid densities while making a bubbling lava lamp!

We added the oil layer so that the glob of baking soda would be partially protected by the oil from reacting with the vinegar.  This results in the baking soda glob sinking, getting covered with bubbles, rising to the surface where the bubbles pop, then sinking again, over and over until it is completed dissolved into the vinegar.  This is what creates all the motion in your lava lamp!

Rubbing alcohol, oil and vinegar do not mix because they have different densities. Density is the amount of mass something has in a certain volume. For example, vinegar (like water) has large, closely packed molecules, so it has a lot of mass. Oil, on the other hand, has smaller, more well-spaced molecules, and thus has less mass.  Rubbing alcohol has even less mass than oil, so it floats on the very top.

Rubbing alcohol can be harmful when ingested or splashed into the eyes.

Pour vinegar into your container, then add one color of food coloring so that the vinegar layer will be clearly visible.

Slowly pour in the vegetable oil; it will float on top of the vinegar.

In a separate container, combine the rubbing alcohol with a few drops of a second color of food coloring.  Now pour it gently into the oil.  The alcohol will briefly submerge into the oil then emerge and float on top.

You will now have three distinct layers:  the blue vinegar layer, the oil layer, and the red alcohol layer on top.  This demonstrates differences in the densities of the liquids.

To make it look like a lava lamp, combine the baking soda and water in a separate container until it forms a goopy paste, then drop a clump of the paste into your container.