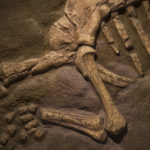 In this science activity, kids will make a dinosaur fossil dig then have fun excavating it.

Fossils are usually formed when an animal or plant is trapped for a very long time under layers of sand and mud. Minerals eventually seep in and replace the organic matter, forming a hard fossil.  Fossils can also be formed from living things being buried in lava, ice or tar pits.

Most fossils are preserved in sedimentary rocks, such as sandstone, shale, and limestone. Sedimentary rocks can be exposed at the surface at natural outcrops (e.g., stream banks, cliffs) or artificial exposures (e.g., road cuts, dams, etc.). Scientists often locate fossils by examining geological maps and determining where sedimentary rocks of particular ages and depositional environments are located.

Scientists who study fossils and other buried artifacts include geologists, paleontologists and archeologists.

Plaster of Paris has been used since ancient times for building and molds; it gets its name from the abundant gypsum deposits found in Paris, from which it is often made.  When combined with water, a chemical reaction occurs, and you can feel the heat from the reaction. The hydrated plaster then hardens.

Combine the Plaster of Paris and water in a disposable container.  Stir in the sand.  Add more sand if you want the dig to come apart easily for younger children; add less for older children.  You want the mixture to be thick -- not too watery, but not too dry and crumbly either – like pudding.

Now add as many items as you’d like to dig out.  Dinosaurs, small bones or puzzle pieces are fun, but so are coins, paperclips, marbles and anything else small and relatively hard that you may have around the house.  Your dig should dry in 1-2 hours.

Be sure to touch your dig after a few minutes to see if it feels warmer – this is the heat coming off the chemical reaction between the Plaster of Paris and water.

When your dig is hard, pop it out of the container and set it on a durable surface, such as a cutting board.  Have fun carefully excavating each of the items inside using a plastic spoon or similar.  Be sure not to use a tool that is too sharp.

Make a large dig in a disposable lasagna tray and tape or draw a thin grid on top, like archaeologists and paleontologists do to mark out an excavation site. Then carefully chart the artifacts found in each quadrant of the grid.

Bury all of the parts of a plastic puzzle, which can then be assembled once all the pieces are excavated.